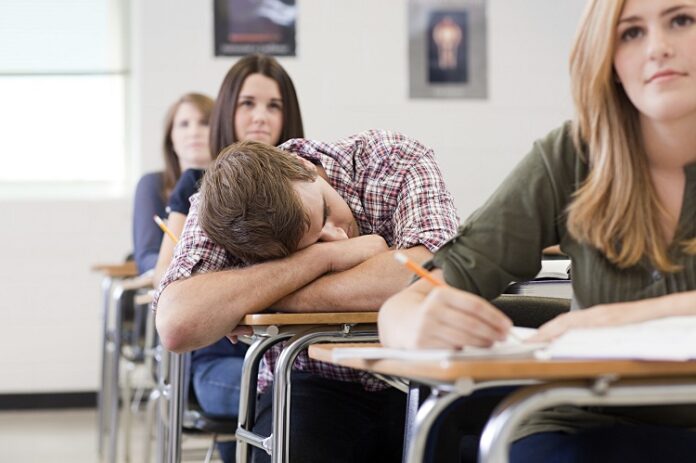 A lot of parents become fearful as their children get to the teen years. This is a common feeling for teenagers to become unpredictable in literally all they do. They get new habits, friends, sense of style, body changes and a desire for money. All of these together with the compulsory duties such as school and other self-responsibilities might suffer lack of sleep. Nowadays, technology has played a role by influencing how our teenagers spend their time and in general, it becomes a perfect storm for chronic sleep deprivation. When a teenager is sleep-deprived it is quite obvious from their behavior and it can be worrying for they become inactive, antisocial and most of them become depressed or fall into drugs. Below are the causes of sleep deprivation on teenagers.

In most parts of the world, a teenager is expected to be in school very early in the morning. While this is expected of them most studies show that teenagers are not functional by 9:00 am. This ensures they wake up early and prepare meaning it is going against their biological needs as adolescents. By them sleeping minimal hours maybe through tackling homework at night and waking up early they form a habit of not having enough sleep. Hence, this becomes a consistent routine that causes lack of sleep and effects start to show in various ways that are not healthy for their general wellbeing.

It is crucial to understand the sleep cycle and hours of teenagers, especially with their hormonal shifts and growth curve. It is a time of their life when hormonal changes are peak and production of the sleep hormone, melatonin is high. Not only is it a sign that they are growing into their teenage years. But it explains why they are more alert at midnight and can sleep up to mid-morning if they have minimal supervision. This change in their biological system is interrupted by the day to day activities. For instance, school, and other extracurricular activities that go against their circadian rhythm pattern. The lack of balance of their sleep and biological needs causes them to be sleep deprived which eventually affects them.

School schedules alone are tight as they can be for most teenagers. Therefore, having to embrace after school schedules such as sports, homework and other social commitments cuts off teenagers sleeping time. Leisure activities as well as television, computer games, and the internet also keep a teenager out of bed. All these overscheduling causes sleep deprivation as they try to keep up with the social pressure of being an “all-rounded” individual. It is important for teenagers to have a routine schedule that does not interrupt their sleep routine to help them tap all the benefits of quality sleep.

Does your teenager have a smartphone already? If yes, their sleep time is reduced every time they bring their smartphones to bed. This is a common cause of lack of adequate sleep as they try to keep up with the world. Through viewing all their social media accounts, like Facebook, Twitter, and Instagram among others. They sleep few hours affecting their productivity outcome the next day at school. Not only that but the blue light from the devices keeps them alert and highly engaged for this exposure suppresses the production of melatonin that makes their brain active. This affects their sleep patterns and causes them to sleep fewer hours and continuously suffer from sleep deprivation.

Having a sleep-deprived teenager puts them in a never-ending vicious cycle that is dangerous to their general well-being. For instance, having a lot of homework that comes with the anxiety and competitive attitudes it makes them study late at night. This causes insufficient sleep which in turn causes the brain to be more active since as an over-aroused brain is less able to fall asleep. This however cannot be improved by drinking relaxing teas, practicing meditation, or improving sleep conditions like their beds, mattress firm and room colors. Because the issue is in their poor sleep routine that when adjusted for quality and quantity sleep makes them better teenagers.

Suffering from certain sleep disorders can be a great cause for lack of sleep. Some of these sleep disorders are sleep apnea, restless leg syndrome among others that inhibit you to have satisfying sleep. While facing some of these conditions it is advisable to visit your sleep specialist to find a solution to help your teenager get the necessary sleep amounts. There can be other related issues that can also interfere with quality sleep such as drug use, snoring, stress, bullying that most of them shy from sharing. As a parent or teen, it is crucial to discuss this issue with a doctor or someone close to you to solve it before it escalates to something serious.

When your child gets to their teenage years most parents increase their expectations of them. This pressure at home and in the outside world as well as it has set a certain bar they should be able to achieve. The belief of the western culture for a teenager is that keeping active is valued more than sleep. When you sleep as a teenager you are labeled lazy, weak and portrayed as one who will be unsuccessful. Social media is part of this pressure with so many people sharing their lives and forcing these teenagers to emulate them. This makes them anxious about life, find short cuts and have tight schedules as they try to work after school to get a lot of money to live a certain type of life as they saw. These social pressures give them sleepless nights instead of allowing them to be normal teenagers.

In summary, our culture requires us and more so the teenagers to value activity to sleep. This lack of adequate sleep can cause poor development of the teenager’s brain, shortened attention span, moodiness, poor decision making among others. Help your teenager schedule their routine schedules as one way of preventing sleep deprivation and letting them make sleep a priority.

Things To Consider Before Buying Cot For Your Baby

How To Choose Shapewear

How to Become an Eyelash Extension Technician?

The Right Lookout for Blazers for Women

7 Types of Boots Always Worth Buying

Old-Skull Ways to Biker Up Your Style

The 5 Reasons Why Your Skin Looks Dull